On the first day of December, the new site layout went live, and the panicked last minute preparations for the launch night were set into motion. At 5:30 we (saying that, It was few people who arrived at that time, but anyway.) arrived in mainly quite formal wear, they sadly persuaded me to wear a dress. There were a few run-throughs of the script, and then people started arriving.

The room was looking very professional and well-decorated, and the layout was well done, with a room to lead the guests through into the main room. Having the voice of a chain smoker or an old cat, I had to forfeit my speaking role, so spent the most part of the night as an onlooker, but at the beginning me, Ruby and Alison were greeting the guests and showing them where to go. When the event finally began, we all filed into the room and sat down, where there was a brilliant mash-up of all the films shown as an introduction, and the rest went very smoothly, with the awards being presented and snippets of each of the films being shown after each award. I was happy, as my favourite film (beloved) won a prize. As there were no seats left due to me greeting the later guests, so I sat at the back. Good placement for running to the food room when the doors were opened.

I must say, the food was pretty dissapointing. With the pretentious and expensive type of food the watershed provides, there was far too little budget and far too little food. Not to put it down, of course, the slice I had was lovely, but for the amount that was spent we could've had at least 50 dominoes. Just a thought.

The mayor and mayoress attended, and it was an honour to meet them. As far as I could see they had a good evening, along with everyone else.

Once the food was gone and the films were over, my little sister was angry and wanted to go home, so I had to leave, but overall it was a well-run evening and it went brilliantly to plan. The Watershed did a news item on the event here. 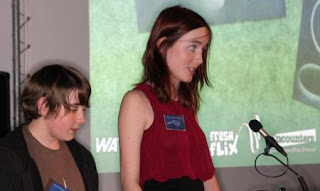 Ruby and Rick reading out the winners and talking about the event.
Posted by Katie Marland at 02:26 No comments:

This week we were set a design brief to create an e-card invite for Electric December.
We got going with this almost straight away. I began by planning out what I was going to do (I planned two, including fonts, images, colour schemes and logo placements.) I decided to try one from a professional angle, and another with a more quirky, colourful approach. I found this task very fun, as I love using photoshop and graphic design, so this was not too difficult, but it did give an insight into the difficulties a designer may come across when faced with a brief and a deadline. Fitting in all the logos while maintaining a tidy atmosphere was the most challenging part, other than working for a deadline, I would say.

My finished products, once printed, looked good. My only issue was that, under the stress of the deadline fast approaching, I had managed to leave out some vital information from my second invite. I quickly changed this, removed some hyphenations from my other, and printed again. These looked decent. My finished products looked like this: 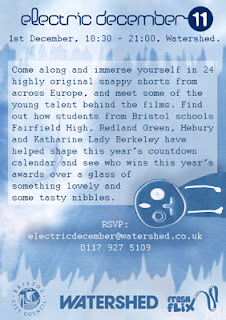 The first, with the blue colour scheme and more quirky approach. 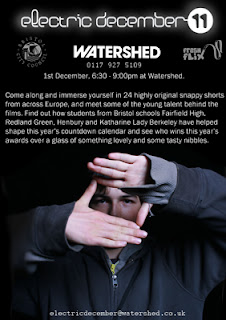 The second, in which I attempted to give a more professional feel.
Posted by Katie Marland at 02:24 No comments: