(Technically this is editing session 3, but last lesson I had no new footage to work with, so I spent it refining clips and finishing documents, so I didn't feel the need for a new blog post.)

This lesson we began with a group discussion, in which Sir claimed that some nostalgic pieces of media are the best in their field, and I suppose the point was that despite him thinking, in his words, the film is 'nostalgic but clearly shit', he managed to put across his point using persuasive language. It was pretty entertaining to hear my peer's responses to this, but the point still got through, and that led us into creating the press pack.

After writing a good 200 or so words on Censored, we moved on to analysing a movie poster, then (you guessed it) we created / completed our own. I have made two posters, one using my graphic art piece, the other using images from the film. This is the latter: 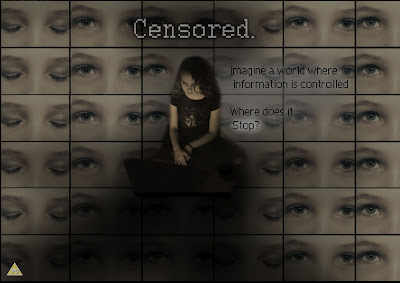 I was quite pleased with this, as it incorporated screen-shots in a very stylised and edited way, rather than simply screenshotting, captioning and then being finished.

After break, we got stuck in to finishing our films. I had recorded the rest of the clips I needed, along-side some new ideas I could include in the film. We were using a new technique of work management, in which we  are set targets, either by ourselves, our peers or Mr Gove. My targets over the lesson were as follows:

So following these I completed my film. We all exported our films, and after lunch we had a screening / feedback session. The general opinion was that my film is good, but that the ending needed work. I took on board the constructive criticism, and edited the end. This is my final version, posted as unlisted for the moment:

Posted by Katie Marland at 08:49 No comments:

Today we began editing our films. This was my first time using Adobe Premiere Elements, so for the first half hour or so it was merely me playing around and getting to grips with the software, but once I had worked it out I  found it to be really useful software. I managed to edit the opening sequence perfectly in sync with what I had pictured in my mind on the first conception of the idea for my film, which I was very happy with, and following this I managed to edit 34 seconds of complete film, the only thing I need to add in to that 34s is the voiceover, which I can record at home then edit into my film later. Once I have made this and filmed two / three more scenes, I will have everything I need to finish my film.

I will be booking a camera tonight, so I can finally complete my footage, log my clips and finish the film.

I exported my film to an avi file, so I could share it on the school network to show the class, and to upload my draft to youtube. I added annotations on the video to give an idea of when the voiceover lines will be, and what they will say.

Today, I also learned that using the original HD camera files does not work with these computers, due to file encoding issues and problems with the school network, so before I could edit I had to change the video format to avi.

This is my film as of yet, with some things that need modification, no voiceover and a general (justified) sense that it is incomplete, but despite this, here it is:

Last lesson we spent most of our time creating our presentations, and then in the last two lessons we presented them to the class. I wrote a script and created a powerpoint presentation, putting more emphasis on the oral side and keeping the powerpoint as support and background for my speech. I did not put any text on the powerpoint, as I find it rather tedious to read straight from it, when those watching could just as easily read it themselves.

My powerpoint was this:


Censored
View more PowerPoint from marlandk
Posted by Katie Marland at 01:34 No comments: