Today we got into school, began a brief bench-marking task (in which we evaluated the Electric December website and one other film festival site, annotating the different flaws and good points on each.) we then were issued cameras and got on a minibus to the Watershed.
On arrival, we were greeted by Maddy (who we met last lesson) who gave us a talk about the W.S, after which she introduced us to the screen-room-controller-guy. (yes, I did forget the word, okay?) He showed us the different equipment, including some pretty amazing looking old film and projectors. We were then led into one of their Cinema rooms, and we watched The Social Network.

The Social Network is a film based on the story of the creation of Facebook, and Mark Zuckerberg's life in result of it. It is a pretty hard hitting film, with mild comfortable humour and well presented soundtracks, it also gives an interesting viewpoint on computer programming and the whole social structure of university. It portrays the sheer power of social networking, and makes you think about the current amount of usage that Facebook actually has. Since creation it has become worth approximately 27 billlion. It is actually a pretty daunting prospect. But the film made us think about how social networking and media could be incorporated into the Electric December promotions.

After the film we were taken on a tour of the Watershed, showed the room we're going to be doing the launch night for E.D in, and looked around their offices. We were also given some bags with the W.S logo on, containing a few brochures and  books, which was quite entertaining to see the boys walking around with :')

We left the Watershed, getting into our white van (run, kids.) and got sandwiches, water and crisps. We went back to our room at Fairfield, ate our lunch and finished off our benchmarking task. 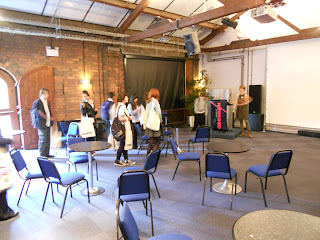 Us looking at the room that we are going to be hosting electric december in.
Posted by Katie Marland at 14:44