This week we were at the Watershed again. This time, we had returned to look at the room in which we will be hosting the Electric December launch night, did some brain storming on good and bad parties, informal vs. formal, how we will decorate the room, signpost, greet guests, dress, the food we will provide, the plan for the evening, the technology, and produced a rough plan for each to be sent to the Watershed even planner people.

Once we had finished this, we were shown to a watershed screening room, in which we watched the 24 films chosen for E.D, we were the jury on which films will win prizes on the night. There were some atrocious films, some hilarious, some disturbing and some brilliant.

Over all, my favorite had to be 'Beloved', a brilliantly shot film with well-incorporated graphics and an amazing twist at the end. There were other films I liked, but this one definitely shone through for me. 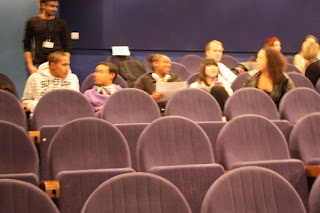 Watching the films. The Watershed has incredibly comfy seats.
Posted by Katie Marland at 12:35